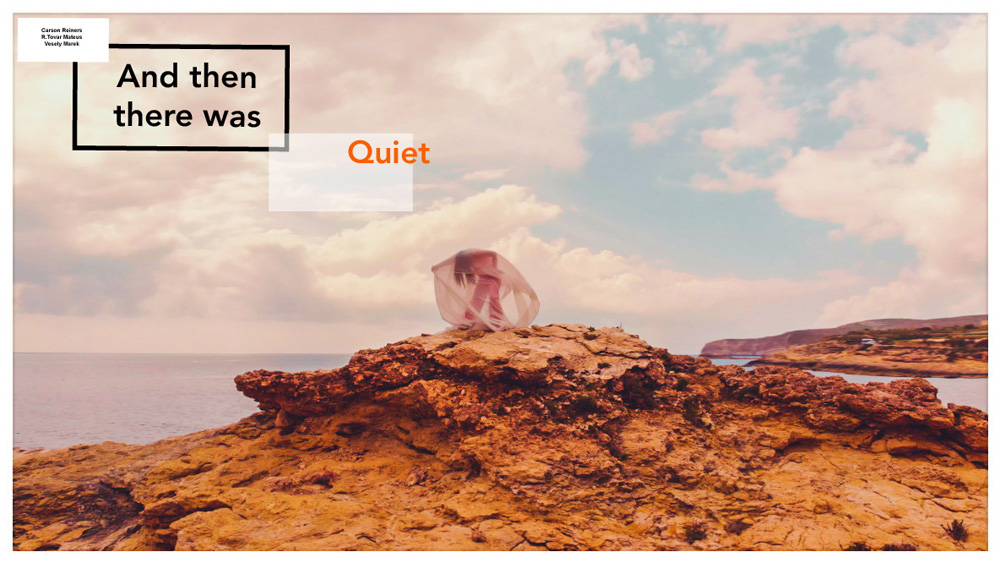 And then there was quiet

“And then there was Quiet” is a piece created by Carson Reiners (Movement Director- Performer) and Ricardo Tovar Mateus (Composer – Performer) with assistance from Marek Vesely (Videographer). It is a piece with original music that combines video projection and multichannel sound to demonstrate the symbiosis between visual and audio elements. Inspired by the personal confrontation of the tragic result of the present times, particularly isolation, worry, and death itself, “And then there was Quiet” was born in response to the quietness or the stillness of movement and sound. Silence and quietness are usually associated with peace and calm.

However, the kind of silence that is encountered in the last year and a half is inescapable; where one is transported to a place of undeniable fraughtness. The creation of this work deals with the environment, humanities current state. It is a reaction to the overwhelming speed and amount of information we are surrounded by that is being forced on our daily being and the reaction to the sound of ‘noise’, or loudness of ‘socio-political commentary’. How can one ‘listen’ to the environment, when it is being drowned out, negated by the stripping away of life and human movement? The departure of loved ones removed before their time, leaving behind emptiness, a void, and a literal silence both physical and auditory.

Vesely Marek is a film director, created in Slovakia, based in Vienna and filming worldwide. After his studies, pursuing an internal artistic intellect, he launched his own film production company in Vienna, Vesely Films, that has received awards in music videos and film productions.

Ricardo Tovar Mateus is a Colombian interdisciplinary composer, performer and curator. His work emerges from the versatility of his musical influences, contrasting aesthetics and exploring the connections between visual art, music, and performance. As a composer his works have been performed in various venues in Europe, North and South America, South Africa and Taiwan. Currently an electronic arts PhD student at Rensselaer Polytechnic Institute in New York. He received his training at the University of Music and Performing Arts of Vienna as well as at the Vienna Conservatory, earning bachelor’s and master’s degrees in composition for instrumental music and media.

Carson Reiners is a multi-dimensional artist and researcher working in choreography, direction, and visual art. Originally from New York City she has had a fifteen-year international career of performance and creation spanning the USA, Europe, Israel, Taiwan, Peru, India, and South Africa. Currently completing her Master’s in Malta on a model for an ecological choreographic process routed in 4E cognition. She earned a Bachelor’s from the Anton Bruckner Universitat in Austria after transferring from CODARTS(NL). An avid educator she has taught across numerous schools and institutions worldwide.