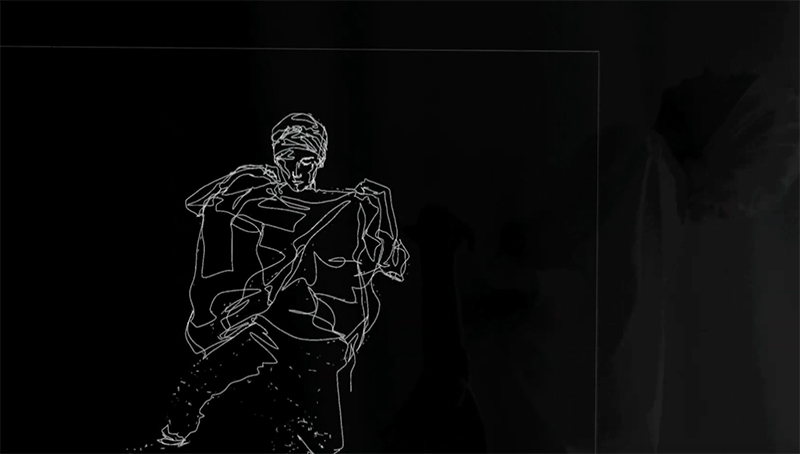 Man changed his position to adapt to the surrounding environment. At any moment he is watching a model similar to its motor behavior of choices. She wants to reconcile with his time while in this transformation, human nature remains the same.

Rose Ansari is an Iranian multidisciplinary artist. For a while she worked as a costume designer for plays, which made her sensitive to the potential of mise-en-scène, lighting and acting as a living being on the scene. Rose Ansari believes deeply in the power of technology in arts which makes the artwork relevant. Her recent works are inspired from architectural space and elements, science of materials, and body movements. Her works have been shown nationally and internationally. https://www.instagram.com/rose_ansarii/

Forest Management is the solo guise of John Daniel (b. 1989), an American musician and composer living in Chicago, Illinois. Active since 2011, Forest Management has released four full-length LPs and a number of cassette and CDrs on various underground labels (including Perfect Wave, Constellation Tatsu, and No Rent), as well as collaborations with modern ambient artists Celer and David Tagg. Initially a touring drummer for various bands in his hometown of Cleveland, Daniel re-located to the Windy City in 2016 and began focusing on Forest Management as a platform for more intimate, late-night experiments with reel-to-reel tape and computer software. His latest full-length ‘After Dark’ (American Dreams Records) is a 2LP of software reconstructions, based on turntable audio of Claude Debussy’s La Mer. https://ra.co/dj/forestmanagement-us