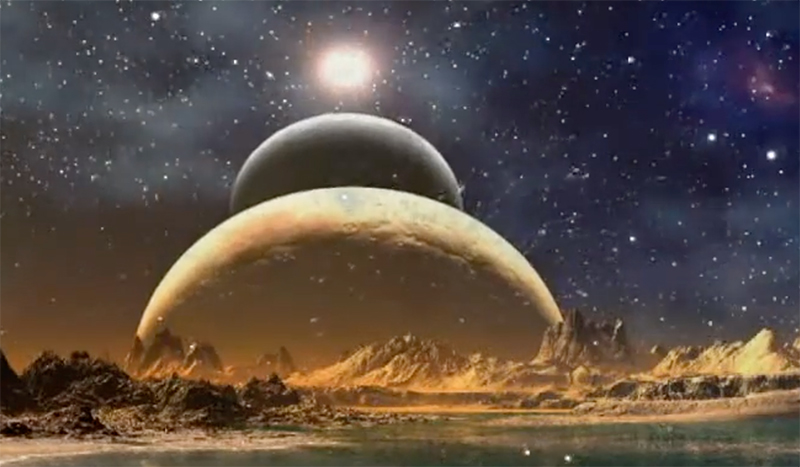 To provide new means of support to proposals on the outskirts of market logic which can influence varied publics and opinion-makers throughout the world is the ideal for the majority of experimental artists. Fortunately, in the contemporary world, the powers have proven to be open to a diversity of manifestations from the various layers that make up the extracts of society and of the productive chain of culture. Specifically in this area, perhaps an imposed semblance hinders greater development and notions of innumerous aesthetics and schools of thought. Based on these presuppositions, we present this new proposal.

As an example of the development of the project, Moonscape: an electronic journey, there is the first musical work entitled Overture, in which harmonies composed of parallel fourths, together with multi-timber sounds that resonate like trumpets and tubas, in addition to percussion instruments, begin the show itself, followed by special effects of light and spatial images, where generator texts conduct the imagination of the spectator through sidereal paths: Life as it exists on the planet Venus had not yet been detected until two beings from this planet arrived on Earth and incorporated themselves into two young bodies. However, what should be an extraterrestrial scientific mission about human sexuality, transforms into something surprising for all involved… Or even: In the center of the Omega Seven Galaxy, there is a small planet called Anrek. Without the Anrekian people noticing, a lethal virus has been introduced into the atmosphere of the planet, initiating the death of the Anrekians. A work team entrusted with the mission of finding a solution discovered that one of the possibilities was in a vaccine developed using the biochemical substances found in large quantities in the bodies of beings from a distant planet in the Milky Way Galaxy called Earth. The Anrekians dress and look like us, as they had taken on human form during their last intergalactic mission: the survival of their world.

MOONSCAPE ADAGIO – (6’16″”) – The contemplation and serenity of the soul. Large and small beings hoisted in the air, dancing the cosmic ballet of the universe: slowly.

Andersen Viana is a composer and professor at Fundação Clóvis Salgado (www.fcs.mg.gov.br) in Belo Horizonte-Brazil. He began composing at the age of 13 and became a professor at the age of 19. Subsequently he completed PhD studies in composition at the Federal University of Bahia (UFBA) and furthered his studies at other institutions in Brazil, Italy and Sweden such as the Federal University of Minas Gerais (UFMG) in Belo Horizonte, Reale Accademia Filarmonica di Bologna, Arts Academy of Rome, Accademia Chigiana di Siena and the Royal College of Music in Stockholm. He has received 34 composition awards in Argentina, Belgium, Brazil, Chile, France, Germany, Italy, Spain, Serbia and the USA. Up to the present he has composed 419 pieces for chamber and full orchestra, choir and various ensembles as well as music for electronic instruments. He has also organized and conducted/directed various vocal and instrumental ensembles such as: Orquestra Experimental (1983), Septheto Rio (1986), Coro Pedagógico da FEBEM (1991), Coro do Centro de Estudos da Embaixada do Brasil em Roma (1993), Coro da Cultura Inglesa BH (1994), Trio Barroco (1994), Orchestra Virtual (1995), Estocolmo Nonet (1996), The Duo (1997), Coro da SMRU, Camerata Primavera (2003), A Cigarra e a Orquestra (2006–2008), the Coral IOCHPE MAXION (2009) and the Coral Sebastião Vianna (2014). He has published articles, scores, CDs, DVDs and books and developed diverse musical projects in countries other than Brazil such as: Argentina, Austria, Belgium, Bulgaria, Chile, the USA, France, Germany, Greece, Honduras, Italy, Portugal, Serbia, Spain, the United Kingdom, the Czech Republic, Russia, Sweden and Ucrania.