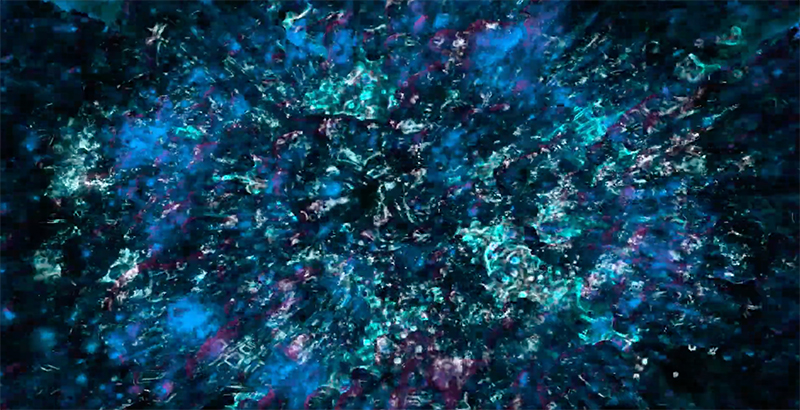 The title refers to Jackson Pollock’s paintings using his dripping technique, which became the source of inspiration for this piece. Volatile environmental sounds captured around the University of Oklahoma, Norman campus underwent a condensation process through Max/MSP (including phase vocoding, and/or granular synthesis “freeze”, filtering, envelope shaping, pitch shifting, among others) to be transformed in to liquid pigments. The liquefied sounds were then arranged in to the canvas (Pro Tools) and balanced dynamically through spontaneous real-time processes.  This piece was made possible with the support of funds from the Research Council of University of Oklahoma. – Konstantinos Karathanasis

My experimental film is based on a 2007 electro-acoustic composition inspired by the works of Jackson Pollock. The animation styles were informed by his paintings, especially by my favorite of his works FULL FATHOM FIVE…and I tried to create the same feelings of dimensions and layers as he did, using computer animation tools. Much of the “paint” is actually achieved with particle systems using volumetric renders, then composited through multiple renders of filters and effects, and then re-composited over and over with other layers of film and animations that had been synthesized in similar fashions. – Geo Holmes

Konstantinos Karathanasis as an electroacoustic composer draws inspiration from modern poetry, artistic cinema, abstract painting, mysticism, Greek mythology, and the writings of Carl Jung and Joseph Campbell. His compositions have been performed at numerous festivals and received awards in international competitions, including Bourges, Musica Nova, SEAMUS/ASCAP, SIME and Música Viva. Recordings of his music are released by SEAMUS, ICMA, Musica Nova, Innova and HELMCA. Konstantinos holds a Ph.D. in Music Composition from the University at Buffalo. He is a Professor of Composition & Music Technology at the University of Oklahoma. http://karathanasis.org

Although I started out very much a free-form abstract filmmaker, I think much of my work has evolved over the years into what I might call Structural Synesthetics…or maybe Ordered Chaos…and this is what I hope comes through in this film…that I see a real order in Pollock’s works…and that his structure was true and perfect. – Geo. Holmes / 2018