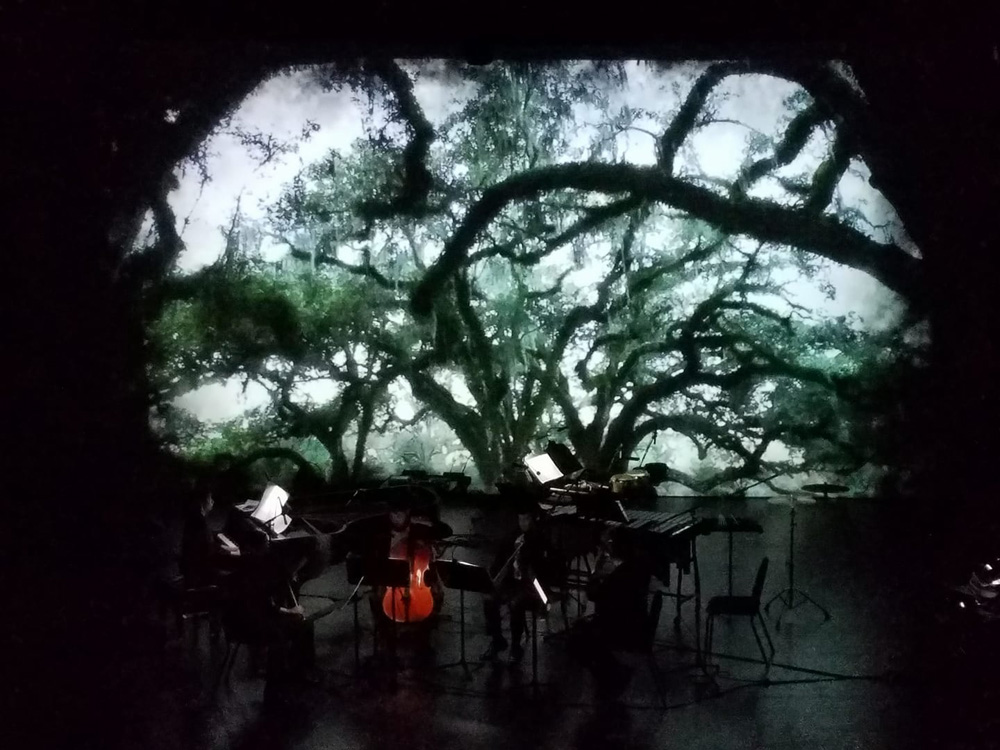 One of the most striking and defining visuals of the United States Deep South is that of the southern live oak tree (Quercus virginiana) shrouded in Spanish moss (Tillandsia usneoides). A tangled and bluish-grey flowering plant, Spanish moss can be seen draped from the sprawling, gnarled branches of oaks throughout the region, hanging ghost-like across its swampy landscape. Southern Specter adopts this poetic image as its subject and is comprised of two different kinds of music. The first is both representational and external, in that it seeks to be a musical embodiment of a moss-covered tree, depicting the delicate moss swaying in a gentle breeze and the tree’s appearance under various gradations of sunlight. The second kind of music is expressive and internal, seeking to convey the various thoughts and feelings one might have upon viewing such an image. Having grown up on the Gulf Coast of Texas, I could not help but channel my own emotional experiences which have ranged from serenity, solemnness, and nostalgia to gloom and ominousness. Richard Johnson’s accompanying film plays with analogous concerns on the visual front: perspective, representation versus abstraction, light and shadow, and ambiguity. Special thanks to Jungle Gardens of Avery Island, Louisiana, for film footage and inspiration. “Southern Specter” was commissioned by Musiqa New Music Collective in Houston, Texas. Loop38 is the performing ensemble.

Richard Johnson is a composer and multimedia artist whose interest in music was piqued during a childhood in which he was obsessed with film and video games. Little has changed since. Equal parts Kurosawa and Spielberg combined to create his ongoing interest in culture and history, the music of Takemitsu and Williams, and an obsession with mystery, adventure, and storytelling. This blend of interests is most clearly present in his set of pieces for soloists, electronics, and video entitled Quaerere Sententias. Richard’s work has been performed throughout the United States and internationally, and has been presented at events such as the SEAMUS National Conference, the National Flute Association Annual Convention, Electronic Music Midwest, Electro-Acoustic Barn Dance, SCI conferences, Thailand International Composers’ Festival, and the Festival Internacional Punto de Ecuentro in Spain. In 2012, Richard received his DMA from the University of Missouri-Kansas City where he studied with Chen Yi, James Mobberley, Paul Rudy, and Zhou Long. He also holds degrees from the Hartt School at University of Hartford (MM) and West Chester University of Pennsylvania (BM). Richard currently resides outside Baltimore, Maryland, where he serves as Assistant Professor of Music Theory and Composition at Harford Community College. www.composerjohnson.com