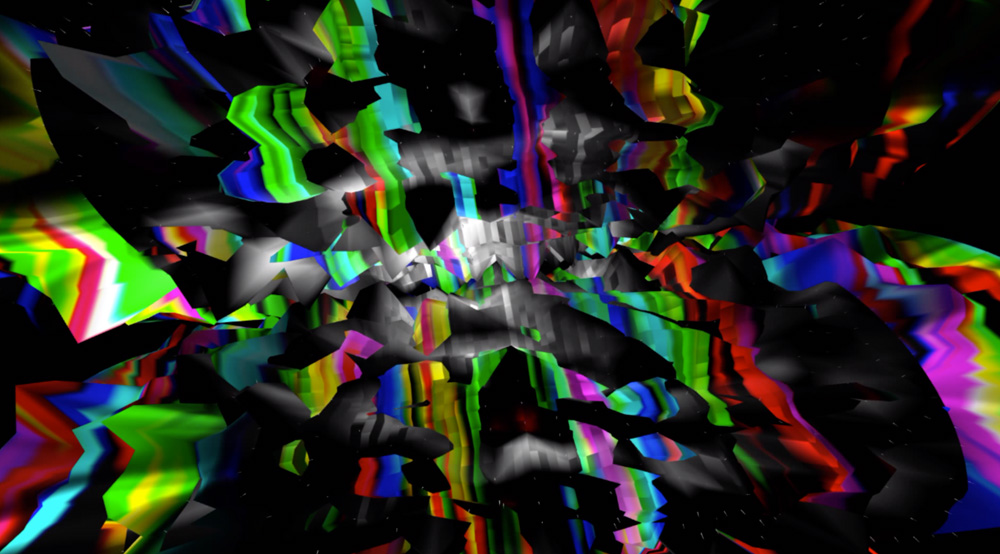 Vega_S (2019) electronic sounds and video is a remarkable piece that represents a mature stage of Igor Kefadis audiovisual composition style. Here, the electroacoustic music seems to bring forth the imagery, as though the sounds are endowed with visual symbolism. The visual composition by Andrew Quinn takes advantage of the imaginative character of the music and seeks to create an organic relationship through the use of a thin white vertical line in the middle of the screen that varies in brightness according to the music. The line turns into a narrow dark space separating two walls that constitute the main element of the visual composition. The walls are curved with a translucent and pixelated structure in black and white that continuously rotate in opposite directions, changing speed according to the sonic variations of the music. Figures appear and disappear in the narrow space between the walls and the spaces and on their left and right sides and the pulsing activity of these intermittent elements are in sync with the music. The audiovisual composition presents us with the ambiguity of experiencing a calculated universe while simultaneously allowing us the chance to move between the world of algorithms. Overall, it infuses us with energy and hope as it suggests the need to disrupt hegemonic structures of power to escape via beams of flight leading to unknown territories. Vega_S is an accomplished example of the synergy of sound and image. The multiplicity of connections between electroacoustic sounds and synthetic images portray the massive potential of audiovisual composition.

Russian composer Igor Kefalidis is the founder and director of the Center for Electroacoustic Music (CEAMMC) at the Moscow Tchaikovsky Conservatory. As a leading figure in the history of electroacoustic music in Russia, he has composed a significant number of pieces for instruments and electronic sound along with audiovisual works. The CEAMMC has built a strong reputation in audiovisual and multimedia composition that takes advantage of the conservatory’s world class excellence in musical performance.

Andrew Quinn is an Australian computer graphics artist and musician, living in Milan. He has worked on digital effects for films such as “The Matrix”, “Tomb Raider”, “Dark City”, “Nirvana” and “Vajont”. In recent years he specializes in video installations for multi screen and immersive environments and also digital graphics for interactive dance productions and contemporary music.
http://andrewquinn.org