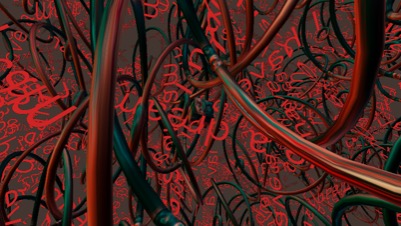 This piece is an ultimate expression of our struggling voices during the year 2020 — the global Pandemic and its anti-Asian discrimination in the United States, the desperate cries of innocent Black people under seize, severe climate change, and its related natural disaster (wildfires for example), colonial control mechanisms, and the institution of Racism — the Hell on this planet continue. We must fight against the single and only autarchic voice. ALL voices should be heard, understood, and respected. Through this piece, the composers call for humanity’s self-redemption: the lessons from experiencing both pandemics, Racism, and COVID-19 expose the planet’s necessity for universal balance, peace, and equality.

Generated using Cables programming language, the visual of this project evolves overtime and is linked with musical riffs and patterns. The design of abstract patterns mixed with the text from Martin Luther King Jr’s “I Have a Dream” speech, is meant to signify the difficult journey of defending and retaining the cultural expressions of indigenous people, African and Asian of America. The relationship between all visual and audio elements are carefully planned. Issues such as how the text functions as the carrier of information and as a graphical element at the same time, the balance between the readability of text and visual aesthetics of abstract patterns, and how the interplay of audio and visual helps to enhance the comprehension of the music, are considered and explored.

Jiayue Cecilia Wu (b. 1978) is an Assistant Professor at the University of Colorado’s College of Arts and Media. She earned her Bachelor of Science degree in Design and Engineering in 2000. In 2013, she obtained her Master of Arts degree in Music from Stanford University. In 2018, she obtained her Ph.D. in Media Arts and Technology from UC Santa Barbara. As a musician, Dr. Wu’s work has been published by Organised Sound, ICMC, SEAMUS, NIME, EMI Records, SONY, Warner Music, Universal Music Group, and many music labels around the world. As a multimedia artist, she received the “Young Alumni Artist Grant Award” from Stanford University. As a scholar, she has received research awards from AES, the University of California, and the U.S. National Academy of Sciences. She is also the chair of the Diversity and Inclusion Committee at AES and the Editor-in-Chief of the SEAMUS newsletter.

Karlton E. Hester, Ph.D. (composer/flutist/saxophonist), began his career as a composer and recording artist in Los Angeles where he worked as a studio musician and music educator. He received his Ph.D. in composition from the City University of New York Graduate Center and is Director of “Jazz” Studies. Hester is also currently Director of the Digital Arts and New Media MFA program at UCSC and member of the DANM principal faculty. As a performer on both flute and saxophone, he is founding music director of the Fillmore Jazz Preservation Big Band (in San Francisco), director of Hesterian Musicism, and served as the Herbert Gussman Director of Jazz Studies at Cornell University from 1991-2001. Hester specializes in premeditated, spontaneous and electro-acoustic composition. His compositions span a wide range; from numerous solo cycles for various woodwinds to chamber configurations, music videos and electro-acoustic symphonic works written in an eclectic array of styles.

Sean Hongsheng Zhai is the CTO at Deep Orange Data, LLC, an IoT data analysis and visualization company. He received a Master of Science from Syracuse University. He is an IEEE member, and a research scholar at TRAC (Transactional Records Access Clearinghouse). He has prolonged interest in computer graphics and algorithmic art. His work has been exhibited in Ars Electronica, ISEA, SIGGRAPH Art Gallery, Boston Cyberarts Festival and many other venues.